Rochester has the curious honour of being a former city.

Growing from a Saxon village to a Roman town in 43 AD, the location was crucial because of its position on the River Medway.

Rochester’s iconic cathedral was founded in 604AD, making it the second oldest bishopric in England. With its cathedral and historic status, Rochester had city status since the time of Henry III. Yet in 2002, it was oddly demoted and is now simply a part of the Medway Towns with Chatham, Gillingham, and smaller surrounding towns. It is definitely not the “City of Medway.” It’s a little silly and more can be read about it in the local news.

Regardless of such technicalities, Rochester is full of historic interest.

Rochester Cathedral is a beautiful example of older Norman Architecture (in the nave) and the emerging Gothic style merging to create a really impressive space.

The streets have a historic feel and you can go on a series of Ghost Walks exploring the ‘haunted’ cobbled streets and winding alleys. Who doesn’t love a tale of a phantom monk?

The former city has two museums; the main Guildhall Museum and the smaller Huguenot Museum.

As someone pursuing museum work, after exploring one, I found a trip to the second one and a quick comparison in store, if only for my own interest. 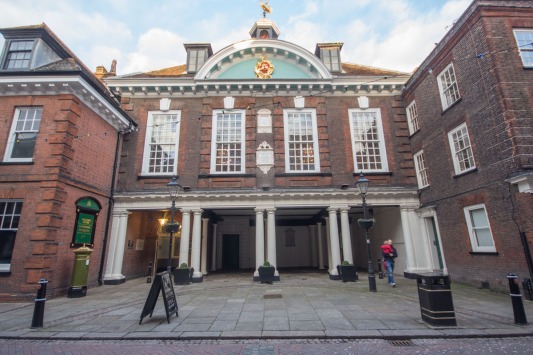 The Guildhall Museum is inside the Rochester Guildhall, a 17th Century civic building given in 1695 by Admiral Sir Cloudsley Shovell to the city of Rochester (as it was at the time). The Museum itself opened in 1897 but moved into the Guildhall from Eastgate House in 1979. As Rochester’s main museum, it tells the story of historic Rochester, highlighting Roman Rochester, its maritime history and, of course, Dickens.

The Huguenot Museum is inside the visitor centre, with its exhibits taking up basically two medium size rooms. It opened in 2015 and lacks the historic pedigree of the Guildhall, but is undeniably shinier. As the only museum of Hugeunot history in the UK, it tells the story of the Huguenot movement from France and the skills and crafts that the group brought with them on their exodus. It focuses on workshops and kid’s activities and has a strong range available, as well as a cute shop.

I am an advocate of interactive content in museums. It is no good having the most interesting collection in the world if families are not going to understand or be excited by it.

The Huguenot Museum, although smaller, has more technology for visitors to play with, as well as the obligatory dressing up section for kids. It felt more welcoming and personal, with a box for visitors to say yay or nay to having Huguenot heritage.

Don’t misunderstand me, I appreciated the Guildhall Museum. It had a nice range of interests and was housed in a truly impressive building.

It was just painfully obvious coming from the newer, smaller, museum down the street, that nothing had been updated in the main display for some years. It felt in needs of letting the light in and chucking out the musty old mannequin figures (a personal revulsion of mine) in favour of some more interactive content.

Regardless, both museums are worth stopping into. The Huguenot Museum is polished and personal, while the Guildhall Museum has more content and is worth visiting even for the impressive building alone.