It is difficult to overstate the popularity of HBO’s Game of Thrones series. Based on George RR Martin’s bestselling book series A Song of Ice and Fire, it is nearly coming to the end of a mind-blowing seventh season. Theories are flying around faster than crossbow fire and none of us know how the story is going to end.

Most people do know that the series is loosely based on real British Medieval history.

British history has a few good Civil Wars to pick between to act as inspiration for the War of the Five Kings. Most cite The War of the Roses as the conflict that Martin drew on most. Yet the Anarchy of the twelfth century is also a well-known and story-worthy campaign.

The Anarchy began when King Henry I died suddenly. His only legitimate male heir drowned in the White Ship disaster, leaving only Matilda, a daughter, to succeed him. A strong and intelligent woman, she was still usurped by her male cousin as the barons refused to recognise a woman ruler.

Many women in Game of Thrones suffer similar denials. Cersei is an example of an intelligent woman soured by being passed over by less capable, but male, leaders. More specifically, Yara Greyjoy claims the Salt Throne from her father but is usurped by her uncle, Euron, when he deems her gender a stumbling block, just like Matilda.

There is a famous incident when Matilda finds herself cornered by her cousin’s forces at Oxford Castle. So, during a snowy December night in 1142, she sneaks out of the castle via rope from a window and travels on foot in the storm to safety. This was so unexpected that the wild plan worked and she casually evaded her cousin’s capture. Perhaps this was inspiration for Sansa’s flight through the snow to escape from Ramsay Bolton?

The Wars of the Roses 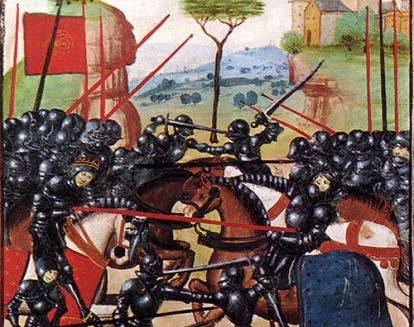 Equally, The Wars of the Roses no doubt inspired the tale. A chaotic and bloody period of British History, it spanned 1455 to 1487. This conflict matches the sheer number of Kings and Queens involved in the fight for the Iron Throne as it spanned dynasties. The crown passed between the Lancaster and York families a shocking number of times in the thirty-year period.

Some have compared Richard III to Tyrion Lannister. Tyrion is born a dwarf and despised by his domineering father. Richard III is remembered by history as a cripple with a hunched back, although the evidence for this is pure propaganda. In a similar vein to Tyrion, Richard actually spends most of his reign helping the poorer classes – introducing the concept of bail to Britain and creating the College of Arms. After Richard is defeated at the Battle of Bosworth by Henry VII, ending the War of the Roses, history is written to paint him as nothing but a villain. The similarities with the way Tyrion is treated are apt.

Another infamous Game of Thrones incident that has a powerful historical precedent is actually the Red Wedding.

I assume no one unfamiliar with the show would have read this far but anyone who hasn’t watched the show should definitely look away now.

The Red Wedding features the unexpected slaughter of almost all of the Stark family at a dinner with the treacherous Freys, aided by Roose Bolton. This is horrifyingly similar to the Massacre of Glencoe in the 17th century. Around thirty MacDonalds of the Clan MacDonald of Glencoe were murdered by guests who had accepted their hospitality. Ostensibly, this was due to the MacDonalds not pledging their allegiances to the new Monarchs, William and Mary, but the history of Highland clan warfare was long and bloody.

The Black Dinner in the 15th century was a similar example where the Douglas family were invited to dine with King James II of Scotland and dragged out and beheaded for no reason besides their growing power. These clan feuds often brew for years and revenge and counter-revenge occurs in a similar way to Martin’s Song of Ice and Fire.

Yet, it is wrong to try to draw too many precise parallels with fiction and real events. Martin has taken inspiration from our bloody history but he is shaking things up and using the historic truths to the most dramatic version.

It would be slightly unfair to comment on the historical accuracy of a fantasy series. The dragons and undead are less real than I would wish them to be. Some of the battle scenes have taken more from Tolkien’s epic than real history. The cavalry riding in as the Knights of the Vale did at the end of Season 6 is more like the Battle of Pelennor fields than the Battle of Bosworth.

Still, it is fun to notice the nods to real events that have inspired such an engrossing epic series.