Today I had afternoon tea at Tiny Tim’s Tearoom in Canterbury.

I took a friend to celebrate her birthday and the self-styled quintessential English Tearoom lived up to its epitaph.

The atmosphere was lovely, open and bright, with pleasant 1930’s décor. The scones they served was almost as big as my head and I had to pack up the second one to take home with me, finding my eyes overestimated my stomach. The service was quick and friendly. There was even a gentleman playing the piano while we ate. 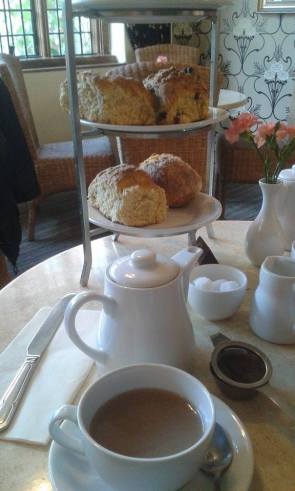 Canterbury is an historic town, where many of the streets are still laid out in a claustrophobic, cobbled network, dotted with medieval listed buildings. It hardly comes as a surprise that the area has a fair few stories of ghosts and hauntings.

Our Cathedral boosts the infamous murder of Archbishop Thomas Becket in 1170 and it is said a water pump in Sun Street has been known to pump out red water, coloured by the martyr’s blood. There are numerous stories of ghostly figures in Canterbury streets – most can be heard about on the Canterbury Ghost Walk. My favourite is the story of a deceased Canterbury Mayor who is said to have been spotted by multiple observers casually riding his bicycle down the streets that he loved during his lifetime.

Tiny Tim’s is said to be haunted by three ghostly children. The story goes that when restorations took place there a few years ago, workmen found children’s teeth and ringlets of hair inside the wall. They then discovered the name, dates of birth and death for the children also in a panel in the wall.

Of course, local legend has grown up that the children’s spirits now disturb the quaint tearoom, moving objects, turning on taps and whispering to staff and customers. People have reported sounds of small feet running upstairs when no one else was in the building and ghostly children’s’ laughter.

There is a little upstairs room in the tearoom that guests can visit and read about the grizzly tale and even I admit, with the historic nature of the building, the black beams overhead, the winding staircase and the creaking floorboards, it make the whole thing feel more plausible.

Logically, these stories do tend to be traps for tourists to attract those of us with a nose for the strange and macabre. Yet to me, the haunting seems like such a strange contrast to the idyllic atmosphere that the tearoom strives to project that it seems an odd thing to use to draw in custom.

If you are ever in the area, I recommend checking out Tiny Tim’s – if not for the ghosts, for the delicious cream teas!